It’s not easy to write about PASS Summit 2013 in a structured way. Just like the summit was buzzing with energy I feel like running around tossing keywords and hashtags at people: #SQLFamily! Ribbons! First timers! Sessions! #SQLKaraoke! Exhibitor booths! It was all a little overwhelming for this shy first-timer, but also exciting and fun at the same time.

You’ll connect with many people in the community. They might even approach you because they recognize you from Twitter! #SQLFirstTimers, #SQLPass and #Summit13 worked wonders for me 😊

This year the PASS Summit was held in Charlotte, North Carolina. Since I traveled from Norway I arrived on Saturday to have a couple of days to be a tourist. Sunday was all about roller-coasters in Carowinds for me. I’ll skip that day and fast-forward to Monday when the fun really began.

Even though this strictly wasn’t a part of the summit I have to mention Redgate’s SQL in the City event on Monday. That really was my first experience with the SQL community. I hadn’t signed up for the pre-conferences at the summit, but was lucky enough to attend this event instead. Redgate’s tools have saved me a lot of time and frustrations, and it was a great opportunity to learn, talk with the developers and see people like Steve Jones and Grant Fritchey present live.

Redgate also invited attendees to an informal networking event on Monday night. Deciding to go to that event was a great idea as that was where I met a lot of great people for the first time. I also met quite a few people who asked me if I knew Tone, a fellow Norwegian whom they all missed. Unfortunately I didn’t, but we quickly got introduced via Twitter. Hopefully we’ll get together at the SQL Server User Group Norway one day!

Tuesday was the first day of the actual Pass Summit 2013 conference for me. I attended the Get to know your community session hosted by Kevin Kline and Kendal Van Dyke, met up with my PASS Summit buddy Aaron Nelson and the rest of his first-timer group, attended the First-Timer Orientation Meeting, and then the Welcome Reception. And if that wasn’t enough, the night continued on with some great #SQLKaraoke! 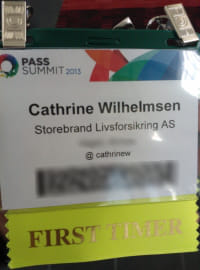 All attendees had a name badge with their name, company, country and Twitter handle, as well as various ribbons on it. The badges were a great way to connect - you could easily take a look at the ribbons to see who were Speakers, Volunteers, MVPs (and more), instantly follow someone on Twitter, or just start a conversation about their company or home country.

On Wednesday I met a couple of nice ladies in the elevator at our hotel. We were all wearing our name badges with the First-Timer ribbon, started to talk and decided to have breakfast together. For lunch I met up with fellow Norwegians at the PASS Chapter Luncheon. It was actually a bit strange to speak Norwegian again for an hour, but nice to get some new contacts in my home country.

Tip #3: Join someone for breakfast, lunch and dinner!

There are always someone who are too shy to sit down at a table and introduce themselves, why don’t you try to be the one who joins them instead?

Between all the food and coffee breaks I attended my first keynote and sessions. Trying to build my session schedule was actually quite frustrating. There were always at least a handful of sessions I wanted to attend! I really look forward to getting the USB stick with all the session recordings so I can watch the sessions I missed. In the evening I attended the Exhibitor Reception where I learned quite a lot about the vendors. I also got some nice SQL swag. And if that wasn’t enough, the night continued on with some great #SQLKaraoke (again)!

On Thursday I started to feel the effects of not enough sleep and too much #SQLKaraoke 😅 I attended the Women In Technology Luncheon and Panel Discussion which was a lot more than an event just for women. The topic of the day was Beyond Stereotypes: Equality, Gender Neutrality, and Valuing Team Diversity. I encourage you to watch it on PASS TV. One of the highlights for me was Gail Shaw’s response to the question Do you have to make an effort to fit in? - No I don’t, because I can’t bloody well be bothered. That answer earned a lot of applause from the audience!

On Thursday night we all gathered in the NASCAR Hall of Fame for the Community Appreciation Party. And as if that wasn’t enough, the night continued on with some great #SQLKaraoke (again again)! I had no energy for karaoke that night, but spent a couple of hours getting to know Bob Pusateri and Andy Yun even better. The next time I’m going to PASS Summit I will definitely work harder on not getting tired ;)

Friday was a bit of a sad day and I wished it could be Tuesday so I could start all over again and do even more. Learn more, meet more people, be more active in the community. But instead of looking back I’m going to take all of these great experiences with me. Now I look forward and use the new inspiration and energy to grow personally and professionally in 2014. I hope to attend and volunteer at a SQLSaturday, maybe even help organize one in Oslo. I hope to share my new knowledge with my co-workers and help improve our solutions at work. And I hope to learn even more and get to know my new connections better. Maybe I’ll even make my own presentation and be a first-timer speaker some day!